More than a dozen Muscovy ducks have died in a Devon town from a disease called Duck Viral Enteritis also known as duck plague.

The disease, found in the ducks at Buckfastleigh, is highly infectious among ducks and geese.

A spokesperson from the AHVLA said the disease does not affect human health.

Residents in the area had initially feared the ducks had been poisoned.

Pam Barrett, one of those who looks after the ducks, said: "It's quite an unusual virus.

"It can be carried by different wild fowl, but only ducks and geese get it, and Muscovy's are particularly prone."

In a statement the AHVLA said: "We conducted a post mortem examination on a Muscovy duck from the Buckfastleigh area.

"The examination indicated Duck Viral Enteritis and this was subsequently confirmed by histopathology."

The AHVLA said any members of the public finding five or more dead wild birds should call the Defra Helpline on 08459 33 55 77. 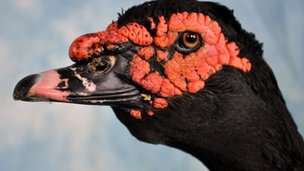